"The Year of the Flood" by Margaret Atwood 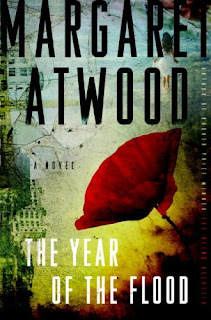 In the near future, the world is run by corporations with names like HelthWyzer, ReJoove and SeksMart. Order is kept by the corrupt police force known as CorpSeCorps. Many of the animals we know now are extinct and the world is inhabited by new genetically engineered species such as Rakunks, Liobams and Mo'Hair sheep. Social and environmental stability are nearing an end.

Inhabiting this world, apart from mainstream society, is an eco-cult named God's Gardeners. Their beliefs combine religion and science, dedicating themselves to the preservation of plant and animal life. Their leader, Adam One, has long been predicting a natural disaster that will forever change life on earth. And now, it has occurred.

The Waterless Flood has wiped out most of human life on earth. But two women have survived. Ren and Toby are both God's Gardeners. As they search for other survivors, they navigate through a changed world and begin a new life as a part of a new human race.

The Year of the Flood is an incredible and astonishing work. It is an excellent commentary on the future of our earth, the moral compass and the frightening path that science can take. And so many other things. The book is packed full of thought-provoking subjects.

It jumps between the present and past, in a way that is not only easy to follow, but slowly and deliberately reveals information about the God's Gardeners, Ren and Toby, and how the earth came to be in its present state.

Love, fear, power, science and religion weave their way through this fascinating futuristic and apocalyptic tale. What emerges is a dark world, with glimpses of beauty, that will speak to any reader and move you to examine the world we currently inhabit.
Canada Reads Canadian Fiction