"Banana: The Fate of the Fruit That Changed the World" by Dan Koeppel 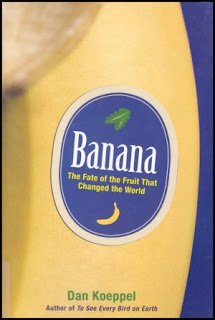 Who knew there was so much to the banana, that yellow fruit most of us put in our cart every time we go grocery shopping. It's sweet, the same size every week and always seedless. For many people around the world, it's what keeps them alive. But that same banana has been at the forefront of major developments throughout history, and now it faces an unsure future.
Ancient evidence suggests that the apple Eve ate in the Garden of Eden was actually a banana. In the early 20th century many nations in Central America had their entire fate rest in the banana. Wars were fought because of the banana. And for years, scientists have been searching for the perfect banana, one which won't succumb to the unstoppable diseases that have wiped out previous varieties of banana.
The book is a very interesting look at the history of the banana, the role that science has played in getting our current banana to the supermarket, and the role the banana has played in the development and history of many countries in the world.
Most of the book looks at the science of the banana and the quest to overcome a disease that is threatening to eradicate the fruit altogether, which does get to be a lot of the same at times in the book. The role of the banana in creating and toppling governments as well as starting war is very interesting.
The book is a quick read. The chapters are short which is good for when the information begins to get a little long. It's an easy to follow book written not for those interested in science but for the everyday consumer who wants to know more about where their food came from.
Banana is a good example of how food and science are now intersecting, and the ramifications it can have for our world. It is another book in a growing library showing us that our food has gone through a lot more than we think to make it's way to our table.
Food Industry Non-Fiction