Showing posts from February, 2012
Show all

"Ali in Wonderland: And Other Tall Tales" by Ali Wentworth

You probably know Ali Wentworth from her hilarious days on In Living Color, or her hilarious role as Schmoopie on Seinfeld, or her hilarious appearances on The Oprah Winfrey Show. And when you take a look at her life, you'll see it's no wonder she is such a funny woman. In Ali In Wonderland: And Other Tall Tales , Ali Wentworth shares tales of growing up in a family of political journalists, rebelling against her blue-blood upbringing and moving to Hollywood. She goes from a childhood among Washington's elite to New England prep school to doing sketch comedy in Los Angeles and then back to Washington when she marries political and media sensation George Stephanopoulos and has two little girls. Ali is honest and funny in this memoir as she shares about her WASP upbringing, the wisdom her non-nonsense and elegant mother imparted in her, and the time she swam around the swimming pool while holding onto the shoulders of Henry Kissinger. She is an amazing story-teller
Post a Comment
Read more

Emily Brown is a beauty therapist who has just made the plunge into owning her own business. With a leap of faith and all of her money she has opened up her own salon called The Beauty Spot. But the business is struggling and Emily needs to find a way to gain new clients quick. Carina Lees has just placed second on a wildly popular reality show is looking for a way to turn her fifteen minutes of fame into a permanent spot in the limelight. One night, on her way to an awards show, Carina suffers a beauty nightmare and pops into The Beauty Spot for emergency treatment. Emily helps her out and Carina is so grateful, that she mentions Emily and her salon at the awards show that night. Overnight, The Beauty Spot is buzzing with new clients, packed appointments and desperate for new staff. But just as things start going better than Emily could have imagined, the salon quickly takes a bad turn. Emily can't figure out why but strange things are happening in the salon and her bus
Post a Comment
Read more

Check out this fantastic video, filmed at a bookstore here in Toronto.
2 comments
Read more

"I've Got Your Number" by Sophie Kinsella

Poppy Wyatt has lost the one thing in the world she shouldn't have - the engagement ring that has been in her fiancé Magnum's family for three generations. On the same day his parents are coming to visit. To make things worse, she's also lost her phone and now the hotel where she lost the ring won't be able to contact her when they find the ring. But then she notices an abandoned phone in a garbage bin. It's perfect, now the hotel has a number they can reach her at. And since the phone was in the garbage, well you know, that whole "finders, keepers" thing. Only the phones owner, businessman Sam Roxton, doesn't agree. He wants his phone back immediately. When he strikes a deal with Poppy to let her keep the phone for just a bit longer, he doesn't expect to have Poppy inserting herself in both his business and personal life. As Poppy juggles wedding preparations, Sam's emails and texts, and hiding her left hand from Magnus and his f
6 comments
Read more

"Running the Rift" by Naomi Benaron

Jean Patrick Nkuba is a young Tutsi who dreams of becoming Rwanda's first Olympic medal contender in track. With the guidance of his coach and the support of his countrymen he trains for the 800 metres and prepares for his entrance to the world stage. But the year is 1994 and Rwanda is thrown into a turmoil that no one is prepared for. As the killing begins, Jean Patrick is forced to flee the country, leaving behind his family and the woman he loves. Jean Patrick finds himself in the most important race of his life. Running the Rift by Namoi Benaron is an incredible novel set in the midst of the Rwandan Genocide of 1994 that left more than 800,000 people dead in just 100 days. The novel won the Bellwether Prize for socially engaged fiction in 2010. This is an incredible, haunting and powerful novel. It recreates the atmosphere of Rwanda in the years leading up to the genocide and gives the reader insight into that which is difficult to understand - how so many people,
2 comments
Read more 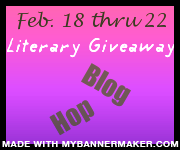 It's time for the Literary Giveaway Blog Hop, hosted by Judith at Leeswammes' Blog . There are almost 60 participants giving away tons of great literary prizes. So hop around, enter the giveaways and find some great new book blogs to follow! Once again, I am giving away some fantastic Canadian literature! CanLit had a fantastic year in 2011 and I'd like to do my part to share some of our wonderful books. The winner will be able to pick which one of the following books they would like: The Stone Diaries by Carol Shields A Complicated Kindness by Miriam Toews Life of Pi by Yann Martel Through Black Spruce by Joseph Boyden To enter, leave a comment below telling me which book you would like to win along with your email address. This giveaway is international and is open until Wednesday February 22 at 11:59pm ET. And when you are done entering don't forget to check out the other participants in the hop! Leeswammes Curiosity Killed The Bookworm Lit Ende
89 comments
Read more

I am giving away a copy of Mornings with Jesus 2012: Daily Encouragement for your Soul. It is a collection of 366 devotions written by Judy Baer, Gwen Ford Faulkenberry, Tricia Goyer, Sharon Hinck, Keri Wyatt Kent, Erin Keeley Marshall and Camy Tang. This giveaway is happening over at my blog Faith Filled Reading. To enter the giveaway, click here .
1 comment
Read more

Colt and Julia dated each other secretly for a year and no one knew, not their friends, their family and certainly not Julia's boyfriend. They were from two different worlds and they knew no one would understand. But to them it didn't matter, they just wanted to be together. But then Julia dies in an accident and Colt's world changes dramatically. Unable to mourn openly, he's haunted by the fact that he may have a had a part in her death. When a journal of Julia's is discovered by Colt, he relives the year he spent with her while trying to move on. But how can he get over her all on his own? The Secret Year by Jennifer R. Hubbard is a country club girl meets boy from wrong side of the tracks love story for teens but with a very serious twist. Julia and Colt feel an undeniable attraction to each other that goes beyond where they come from and what people expect of them. But the only way they can be together is secretly, or so they choose it to be that w
2 comments
Read more 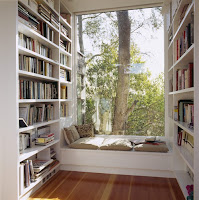 Seriously, Pinterest is addicting! Here are some reading nooks I spotted while scrolling through the site.
2 comments
Read more

"The Invisible Ones" by Stef Penney

Private investigator Ray Lovell has been hired by the family of Rose Wood to discover why the Gyspy woman went missing six years earlier. The last whereabouts of Rose were right before she supposedly ran away with a non-Gyspy from her Gypsy husband and her ill newborn child. Her husband's family, the Jankos, are an eclectic, mysterious bunch who are reluctant to let any outsider into their lives. That is why Ray, half-Romany himself, is the only one who can do the job. But the Jankos aren't exactly forthcoming and Ray finds himself deep within a mystery that may have consequences for himself. The Invisible Ones by Stef Penney is a mystery set in the fascinating world of Gypsies in 1980's England. It is an in-depth and very interesting look at Gypsy culture, something that most people only know from a negative perspective. In this book we see the culture through so many different eyes - the half-Romany who grew up outside of the culture, those who remain deeply a p
1 comment
Read more
More posts