Showing posts from October, 2015
Show all

A Collection of Books My Kids Are Reading   Reading Together Charlie and the Chocolate Factory  by Roald Dahl A1: Age 8 Escape from the Overworld: An Unofficial Minecrafter's Adventure by Danica Davidson   Mini-Souris: Reine Du Monde by Jennifer L. Holm and Matthew Holm A2: Age 6 Pat le Chat: J'adore aller à l'école  and Pat au Baseball  by Eric Litwin ABC of Toronto by Per-Henrik Gurth
Post a Comment
Read more

Rory McGovern has what many people would consider the perfect life.  Forty-something, she has a creative freelance job, two beautiful children, and is married to an actor.  She is in the prime of her life and loving it. Until one day, her husband Blake returns home from auditioning, despairing over losing out on another part, and announces that he needs a break.  In other words, he’s leaving.  Just like that, Rory is a single mother in need of a job.   When a colleague tells her of an opportunity at a digital media start-up, Rory jumps at it because she has no other options.  But this new job is a high-end lifestyle website - for kids.  Rory now has to spend her days sourcing furniture and home decor for toddlers.  On top of that, her bosses are girls barely out of childhood themselves.  Can Rory navigate this new, foreign world of millennials while holding her marriage and family together? How to Be a Grown-up is the newest novel from Emma McLaughlin and Nicola Kraus,
Post a Comment
Read more

"Between the World and Me" by Ta-Nehisi Coates

How does one live in a country that was built on the false notion that you as a person are less than others?  In a nation where the ruling powers have used the colour of your skin as an excuse to enslave, segregate, lock up, and murder?  How does one move forward with hope and optimism in a world that so often places little value on you?   In Between the World and Me , writer and editor Ta-Nehisi Coates addresses these issues through a letter to his adolescent son.  A son who is growing up in a world that claims to be progressive, that claims to be past racial issues and yet everyday bombards us with images of Eric Garners, Freddie Grays, Trayvon Martins, Sandra Blands, Tamir Rices, Michael Browns, and so many more.   From the streets of Baltimore in the 1980’s to Howard University in the 1990’s, Coates shares his story of growing up Black in America to help his son understand the world into which he was born.  As a young boy he quickly learned the ways of the world outside
1 comment
Read more

"All Inclusive" by Farzana Doctor

Working at an all-inclusive resort sounds like a dream job for most people who live in countries where winter exists.  Who wouldn’t want to live and work in paradise? But with the endless paperwork, quotas to meet, and tourists who think that she is always on call it isn’t what Ameera, a Canadian working at a Mexican resort, would call paradise. To get away from the hassles of her work, Ameera spends her time in the resorts swingers’ scene.  There are always couples on vacation looking for a single person to join them and Ameera fills that spot easily.  She is able to hook-up without having to worry about the person becoming attached or ever having to see the person again.   But while Ameera thinks she is being discreet, someone knows exactly what she is up to and has anonymously informed her supervisor.  She needs to find out who is spreading the rumours about her before she loses her job.  Meanwhile, one of her encounters is with someone who can help her solve a mystery th
Post a Comment
Read more

Martin John is the man you don’t want to be sitting next to on the subway.  He’s trying his best to keep his impulses under control.  But when you have the urges that Martin John has, can you really stop? Martin John is not a good person.  His mind does not work the same way as other people.  This leads him to do things to other people.  He touches them.  His mother has tried to stop him but the only thing she could do was to send him far from home.  He’s sought help, he has his coping methods, but can it actually help? Martin John , by Anakana Schofield, is a bold, brave, and disturbing novel that takes you inside the mind of a man every woman tries to avoid.  It is a footnote to Schofield's first novel, Malarky , with Martin John a character in that book, but it is not necessary to have read that book first. One of the best words to describe this book is uncomfortable.  How can this subject matter not be?  Schofield takes you inside the mind of a man who is an abus
Post a Comment
Read more

Faye, a British writer, is spending a part of her summer in Athens teaching a writing course.  But it is the people she meets along the way that define her trip.   There is something about Faye that people want to tell her their stories the moment she meets them.  It begins with the passenger sitting next to her on her flight.  He tells her of his childhood, failed marriages, and the boat he owns in Greece, which he offers to take her on.  And from there, she continues to meet people who tell her of their loves and loss, their hopes and dreams, their pasts and presents.  And though Faye is mostly the listener, her story slowly begins to emerge amongst the others. Outline , by Rachel Cusk, is a collection of stories all told to the same person. It’s not a book that is plot-driven, but rather character-driven, told through conversations. Upon beginning this book, I really didn’t think it would be a book for me.  I didn’t think I would care much for characters who just tell
Post a Comment
Read more

"The Illegal" by Lawrence Hill

Keita Ali has been running all of his life.  Hailing from Zantoroland, an island in the Indian Ocean that produces some of the fastest runners in the world, he is a rising star in his homeland with the chance to travel the world competing in the biggest marathons.  But the political instability of his country makes it a dangerous place to live and after his father, a journalist, is killed, Keita knows that he must escape.   While running a marathon in a neighbouring country, Keita goes into hiding.  He heads to AfricTown, a community in the wealthy Freedom State where many other refugees before him have sought shelter.  But the government of Freedom State is determined to deport the refugees, and will go to great, clandestine, and terrible  lengths to do so.  And Keita isn’t just running for his own life anymore, he’s running to save the life of his sister who is in trouble back in Zantoroland.  He needs to win money from races to secure her freedom, all the while eluding the
Post a Comment
Read more 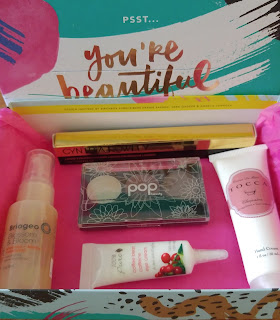 My second Birchbox! So far, I'm very impressed with this service.  I like the products I'm receiving and it's so much fun to open the box and be surprised by what is in there. (I have a better camera, now I need to work on my photography skills) 100%Pure Organic Coffee Bean Caffeine Eye Cream An instant pick-me-up that reduces the appearance of fine lines and dark circles. I was very excited to try this out because I've been thinking it's time I start using an eye cream.  The smell of this one put me off a bit, it's a familiar smell and reminds me of a place but I can't quite put my finger on what that place is (obviously that's just a personal thing, but the smell is different.)  Am I noticing a major difference under the eyes? Nothing that I can say would make this a miracle cream but I definitely feel like it's working especially on the circles. Briogeo Blossom & Bloom Volumizing Blow Dry Spray This ginseng and biotin-infus
Post a Comment
Read more

A landlord who cannot get rid of his loud and violent tenants, a man whose wife blogs about motherhood insulting him in the process, women at a bar desperately seeking husbands.  These are just a few of the “so-hip-it-hurts” characters in Russell Smith’s newest short story collection, Confidence . I was instantly drawn into this collection and I quickly realized why. This segment of Toronto’s population - the overly-hip, upper middle class, young and privileged - is the one that people love to hate.  And Smith does a fantastic job at capturing exactly the reasons why we dislike them.   My favourite stories: Crazy - a man who is dealing with the aftermath of a wife who thinks he is cheating on her and has tried to commit suicide.  While she is in hospital awaiting her release, he heads to a massage parlour. Gentrification - a man and woman rent out their basement apartment to two women who are often loud and violent.  They are trying to find a way to evict them, but
Post a Comment
Read more

"The Reason You Walk" by Wab Kinew

Sundancer, academic, musician, chief, activist, journalist.  In the public sphere, Wab Kinew carries many different titles.  In his private life, he also carries many titles, and one of those is son.  Born to an Anishinaabe father and a non-Native mother, he grew up on a reserve in Northern Ontario and in urban Winnipeg.  His father was a traditional chief, a respected leader engaged in politics at every level, and a residential schools survivor.  But to Wab, he was a man who found difficulties connecting with his children which put a lot of distance between them. When his father was diagnosed with terminal cancer, Wab decided to put his career on hold and spend a year reconnecting with his father.  As Wab learned about his father’s experiences at the residential school, his activism, and his role in reconciliation, they grew close. They confronted their pasts and together looked to the future.   The Reason You Walk , by Wab Kinew, was born out of that year they spent togeth
2 comments
Read more 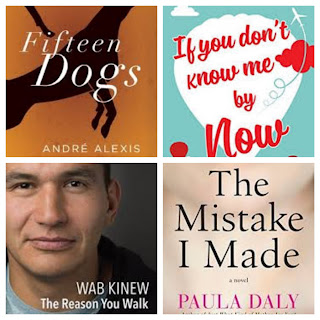 September is always a great month to be a reader here in Canada.  Two of the big three literary prizes were announced and the Word on the Street book and magazine festival took place (click here for my post on the day.)  It's also a month where I tend not to read as much because I'm working on getting back into the routine of everyone being in school.  After a few months of not reading any Canadian books, now it's pretty much all I will be reading for the next two months and I'm loving that. Here is what I read in September with my GoodReads ratings: The Reason You Walk by Wab Kinew ***** The Mistake I Made by Paula Daly **** Fifteen Dogs by André Alexis **** If You Don't Know Me By Now by A.L. Michael **** Challenges Diversity on the Shelf (2), Canadian Book Challenge (2) What I'm Looking Forward to in October Amazing CanLit.  I'm working my way through the Giller Longlist right now and I also have two more books on the Writers' Trus
Post a Comment
Read more
More posts