"The Story of Stuff: by Annie Leonard 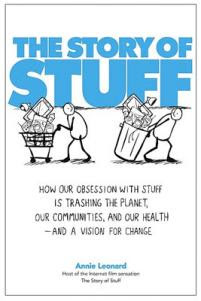 We have too much Stuff. And that Stuff is destroying our environment. In the United States, just five per cent of the world's population is consuming 30 per cent of the world's resources and creating 30 per cent of the world's waste.
While walking down the street in New York City, Annie Leonard noticed all of the garbage piling up on the sidewalks and decided to follow exactly where this stuff went. Since then she has been following Stuff all around the world, through mines, factories and garbage dumps. What she has found has frightening repercussions for our world.
In The Story of Stuff, a book based on her internet film sensation of the same name, Leonard examines the five stages of our Stuff - extraction, production, distribution, consumption and disposal - and the effects it has having on our health, our homes and our environment.
The book really makes you think about where your Stuff comes from and what went into getting it into your home. Most of us don't realize that the demand for video game systems has caused strife and death on the other side of the world. This and many more shocking details are included in the book.
The book is heavy on the science but in a language that makes it easy to understand. It is not a depressing or preachy book, but one that looks at a very real threat to our world and provides hope and alternatives to our current system.
The Story of Stuff will definitely change the way you think about Stuff and have you paying more attention to where your goods come from, what went into making them and whether or not it was worth all of the trouble to have it in your home. If you are ready to make a change in your consumption habits, read this book. If you aren't ready to make a change, read the book and see why you need to.
Non-Fiction