Showing posts from December, 2015
Show all

Another year comes to a close. I say it every year that it feels like the year just flew by but this year seemed to go faster than most.  Maybe it was because it was such a fantastic year in books for me!  A personal highlight from 2015 was getting a job in a bookstore, because isn't that the dream?  Now let's see how my year in reading went: Trends This year, I kept detailed track of the books I read so that I could see what my reading habits are like. Here are some interesting stats from that: 96  Books Read, 27384  Pages Read Average Rating: 4 31% of the books I read were Canadian.  The next most-read genre was Chick Lit at 19% . 69%  of the books were written by female authors. 38%  of the books I read were diverse books. Popular Posts Daydreams of Angels by Heather O'Neill All Inclusive by Farzana Doctor The Reason You Walk by Wab Kinew Villa America by Liza Klaussman China Rich Girlfriend by Kevin Kwan Life or Something Like It by Annie Lyons
2 comments
Read more 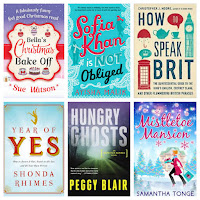 December was a great month for reading for me.  I thought I would get very little reading done as I started working, however I guess since I'm working in a bookstore, it inspired me to read even more! I also chose some really good books this month that I just couldn't put down so that helped as well. Here is what I read in December with my GoodReads ratings: Everything I Never Told You by Celeste Ng ***** Always the Bridesmaid by Lindsey Kelk ***** The Widow by Fiona Barton **** Number Two by Jay Onrait **** How to Speak Brit by Christopher J. Moore **** Bella's Christmas Bake Off by Sue Watson **** The Vintage Guide to Love and Romance by Kirsty Greenwood **** Sofia Khan is Not Obliged by Ayisha Malik **** The Year of Yes by Shonda Rhimes **** Mistletoe Mansion by Samantha Tonge *** Yes My Accent is Real by Kunal Nayyar *** Challenges Diversity on the Shelf (4), Canadian Book Challenge (1) What I'm Looking Forward to in January A whole new
Post a Comment
Read more

Everyone’s favourite Canadian (but left us for America) sportscaster is back with more hilarious stories from the worlds of sports, Canadian media, and now (because he left us for America) Hollywood.   Number Two: More Short Tales from a Very Tall Man , by Jay Onrait, picks up where his first book, Anchorboy , left off and gives us more hilarious stories that will have you laughing out loud and completely grossed out, probably at the same time. One has to wonder about Jay Onrait.  He is most certainly a hilarious guy, but how one earth is this his life?  Does he go out looking for crazy things to happen or do they just find him?  In this book Jay shares about hilarious circumstances in his life like trying to get a medical marijuana license, not giving up his table at a restaurant for Jay-Z even though it was Jay-Z’s table, getting bumped off of television appearances because of Rob Ford’s crack confession, and the madness that was the 2014 Sochi Olympics.  Oh, and the time
Post a Comment
Read more

"The Widow" by Fiona Barton

Canadian Publication Date: 16 February 2016 Jean Taylor’s husband died last week and while it is expected she would be mourning, she is actually quite relieved.  Because for years, she kept quiet about her husband- from her family, friends, the media, and the police.  But she doesn’t have to keep quiet anymore. Years ago, Jean’s husband Glen was accused in the disappearance of a young girl but the police were never actually able to prove that it was him.  Jean remained the perfect wife and insisted to the police that her husband couldn’t have committed the crime.  Throughout all of the accusations and harassment, she stood by Glen.   But now that Glen is gone, she can tell the truth.  It’s what everyone has been waiting to hear, and the police and the media are ready to listen.  But if Jean has been covering up for so long, will it be easy for her to finally tell the truth? The Widow is a stunning debut psychological thriller by former journalist Fiona Barton.  Pois
1 comment
Read more

Amy Lane is about to have the worst Christmas ever. Her husband of twenty years has just left her for a younger woman with a stripper pole in her bedroom.  Her university age children have called to tell her that they won’t be coming home Christmas day.  And as usual, her year ten students are capturing her lowest moments on video and uploading them to the internet. Bella Bradley will once again be having the Christmas of everyone’s dreams.  The queen of television cooking, her Christmas specials are always the highest rated shows.  She’s married to the ‘Silver Fox,” a war correspondent loved by all.  Her life is just one big Hello magazine spread. When Amy’s and Bella’s Christmases collide, it can only result in one thing - the best bake off the country has ever seen.   Bella’s Christmas Bake Off , by Sue Watson, is a fun novel that includes all of the essentials of Christmas - friendship, baking, helping each other out, and of course, a little magic. The premise of
Post a Comment
Read more

Annabel Buchanan has lived a life that many dream of.  Like the generations of her family before her, she is beautiful, wealthy, and has impeccable manners.  Or so she likes everyone to think.  A tragedy is about to show the cracks in her perfect image. Annabel’s teenage daughter Izzy is in need of a kidney transplant.  They are desperate to find a donor and Annabel must turn to her family - her real family.  It turns out that Annabel was given up for adoption by her teenage parents. When Annabel first meets the Bensons, she is embarrassed and put off by who she discovers.  The Bensons are, well, let’s just say not as well put together as Annabel is.  And the Bensons aren’t exactly impressed by Annabel’s pedigree.   As Christmas approaches, Izzy’s situation becomes more dire and the Bensons and Buchanans soon find themselves growing close as they race to find a donor.  Maybe this holiday season, Annabel will discover that you really can’t choose your family. A Proper
Post a Comment
Read more

Kimmy Jones dreams of two things - seeing her name in the headlines of the gossip pages she loves to read and owning her own cupcake company.  While she may only ever read the gossip magazines, she can definitely get her company up and running.  But when her boyfriend tells her that owning her own company isn’t sensible and that she should get a job sorting potatoes with him, she realizes that her relationship has come to an end. Finding herself homeless just before Christmas, Kimmy pretends to be a professional house sitter along with her best friend Jess and her first job is at the incredible Mistletoe Mansion.  Before she knows it, she’s living the glamorous life she always dreamed of.  She becomes fast friends with Melissa, the golf WAG next door who has the paparazzi staking out her home.  And her cupcake business is off and running thanks to Melissa and her rich friends.   But Mistletoe Mansion isn’t all it seems.  Some very strange things are happening. Mysterious mus
Post a Comment
Read more

"Everything I Never Told You" by Celeste Ng

Lydia is the favourite daughter of Marilyn and James Lee, a mixed race couple raising their three children in 1970’s Ohio.  Studious, beautiful, and obedient, her parents see in her everything they were unable to achieve.   But Lydia is dead now.  And the family cannot understand what happened.  At first she was just missing but when her body is found at the bottom of the local lake, the family dissolves into chaos.  As they deal with the fallout from her death, they must confront the long-kept secrets and hidden emotions that threaten to tear the family apart for good. Everything I Never Told You is the debut novel from Celeste Ng.  It is a story of family and identity, of finding yourself and living up to expectations.  Haunting and moving, it is an incredible and poignant novel. When I first picked up this book, I thought that it was a mystery - Lydia is dead, what happened and who killed her?  But it is actually much less about her death and more about the drama sur
Post a Comment
Read more

In Red Deer Alberta, Chinksta rap is the all the rage.  And the biggest star of the scene is rapper King Kwong.  But not everyone is a fan of Kwong - his younger brother Run doesn’t like his music or his personality.  He wishes he could have nothing to do with him.   But Kwong has gone missing, days before the biggest performance of his life.  Run doesn’t really want to get involved, but when his mother is wounded by a bullet fired into their home, he has no choice.  Before he knows it Run, along with his best friend Ali, finds himself in the middle of a battle between Red Deer’s rival gangs.   Chinkstar is a raw and fascinating novel by debut Canadian author Jon Chan Simpson.  A story of music, family, and culture, it takes readers on an adventure into a crazy world. I decided to read this book after hearing Jon talk at the Word on the Street festival this past summer.  Speaking on a panel about diversity in the publishing world, he was hilarious and insightful and I k
Post a Comment
Read more

"Shopaholic to the Rescue" by Sophie Kinsella

Becky Bloomwood is on her biggest mission yet…and it has nothing to do with shopping. The last time we saw Becky, her father Graham had disappeared with her best friend’s husband, Tarquin.  All she knows is that they left Los Angeles because Graham was hoping to set right a relationship from the past.  But Becky’s mom, and her best friend Suze, are convinced there is something more sinister happening and that the men are in danger.  Now it’s up to them to track the men down. And so, an RV carrying Becky, her husband Luke, her daughter Minnie, her mom Jane, her mom’s best friend Janice, Suze, and Becky’s archenemy Alicia is headed to Las Vegas and time is of the essence. Shopaholic to the Rescue is the 8th novel in the always popular Shopaholic series by Sophie Kinsella.  It is a fun and witty story of adventure and hijinks that only Becky can get herself into. So let’s start with the obvious, what everyone is saying when it comes to this series.  It does feel like i
Post a Comment
Read more

It's December 1st and before we know it Christmas will be here.  It's time to get out and buy those gifts. And I always say that you can't go wrong with a book.  But the bookstore can be very overwhelming and it's very tempting to pick anything off the bestseller wall and be done with it.  But if you're looking to get something with a bit more thought put into it, here are my suggestions of books that you can't go wrong with. For the Teen in your life: Everything Everything  by Nicola Yoon The story of a teenage girl who has a disease that keeps her from being able to go outside.  She's content in the world she lives with, until she falls in love with the boy next door.  An absolutely sweet and moving story. For the person who is well-read: The Readers of Broken Wheel Recommend by Katarina Bivald A young Swedish woman arrives in a small-town in the United States to find that her vacation isn't going to go as planned. So what does on
2 comments
Read more
More posts