The first half of this month was marked by very little reading. But the second half of the month was all books all the time. Maybe it was all the rain we got that kept me inside and curled up on the couch. I did not read most of the books I had planned on reading during the month but I found some other great ones to get into. And of course, I did not blog like I had hoped so this continues to be a work in progress.  Here is what I read in May: ⭐⭐⭐⭐⭐ I Can't Make This Up: Life Lessons  - Kevin Hart ⭐⭐⭐⭐ Into the Water  - Paula Hawkins The Other Half of Happiness  - Ayisha Malik When Dimple Met Rishi - Sandhya Menon Run, Hide, Repeat: A Memoir of a Fugitive Childhood  - Pauline Dakin ⭐⭐⭐ The Last Neanderthal  - Claire Cameron This is That: Travel Guide to Canada  - This is That Fierce Kingdom  - Gin Phillips June I don’t have much planned in terms of what books I want to read in June. The Child by Fiona Barton is coming out, it is one tha
Post a Comment
Read more

April Review/May at a Glance 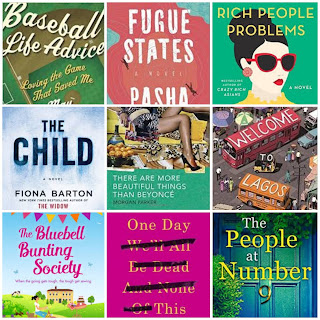 April April has by far been the best reading month in terms of getting into a good reading groove and spending the whole month with a book in my hand. And because of that I ended up reading 10 books and for the first time in years am still ahead on my reading goal (which at this point of the year is usually already failing.) I'm also trying out a new way of posting here, by posting 2-3 reviews of recent reads that all share a similar theme. The reviews are much shorter but this way there is a lot less pressure on me and I feel content to just read. Here is what I read in April: ⭐⭐⭐⭐⭐ One Day We'll All Be Dead and None of This Will Matter - Scaachi Koul Baseball Life Advice  - Stacey May Fowles ⭐⭐⭐⭐ The Bluebell Bunting Society  - Poppy Dolan The Child  - Fiona Barton Welcome to Lagos  - Chibundu Onuzo Rich People Problems - Kevin Kwan There Are More Beautiful Things Than Beyoncé  - Morgan Parker ⭐⭐⭐ Rock Solid: My Life in Baseball's Fast Lane  - Tim Ra
1 comment
Read more 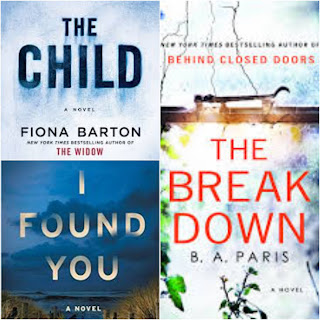 I Found You by Lisa Jewell  (out now) Thanks to the dominance of the psychological thriller in the book market over the last two years, I have been reading a lot of mysteries lately. And recently, they’ve all started to blur into one and I have been getting tired of them. Enter this book. I Found You renewed my love for the genre and showed me that Lisa Jewell is one to read. Right from the start I was hooked on this one. I really liked how the book went between different people and their parts of the story. Then when the book picked up in the past in the second part, I really didn’t want to put it down. I spent the majority of the book playing detective, trying to piece it all together before the book did it for me, which I absolutely enjoyed in this one. Jewell gives you just enough in each chapter to move the story line along and keep you absolutely hooked, wanting to know what happens next. The Child by Fiona Barton  (release date: June 27) The Widow was a w
Post a Comment
Read more

One Day We’ll All Be Dead and None of This Will Matter - Scaachi Koul A unique voice, Koul is the first generation Canadian daughter of Kashmiri immigrants whose stories will resonate with everyone. Even this extremely pale Northern European could relate to her piece on body hair. The essay “Mute,” about the online harassment she experienced after encouraging non-white, non-males to submit pieces to her workplace, is reason enough to get this book. It is horrifying and a must-read for all.  The rest of this book is just as fantastic. This is the first of Koul’s work I have read but I’m definitely following her everywhere now (you know, in a non-creepy, admirer of her writing way.) All The Lives I Want: Essays About My Best Friends Who Happen to Be Famous Strangers - Alana Massey I picked up this book after reading a very short blurb which pretty much included the title and said it was one to read this year. Based on the title I was expecting a lighter commentary
2 comments
Read more

March Review/April at a Glance 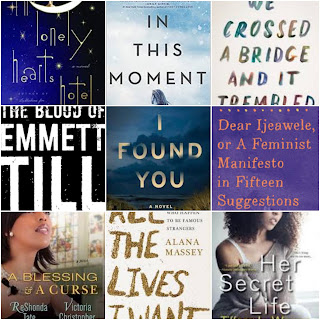 March I'm reading. I'm totally reading. But I'm not blogging. I can't do it all people! Between reading the books and selling the books, I'm just not finding the time to blog the books. I'm much more active on Twitter and Instagram so follow me there (@goodbooksandtea) where we can really discuss books. But I do promise that I will be posting a bit more in depth reviews on here in the weeks to come. I think I may have found a way that works for me, we'll see how it goes for the month of April. Here is what I read during March: ⭐⭐⭐⭐⭐ Dear Ijeawale, or a Feminist Manifesto in Fifteen Suggestions - Chimamanda Ngozi Adichie We Crossed a Bridge and It Trembled: Voices from Syria - Wendy Pearlman ⭐⭐⭐⭐ I Found You - Lisa Jewell A Blessing and a Curse - ReShonda Tate Billingsley and Victoria Christopher Murray The Blood of Emmett Till - Timothy B. Tyson ⭐⭐⭐ The Lonely Hearts Hotel - Heather O'Neill In This Moment - Karma Brown Is Canad
Post a Comment
Read more

"Rest In Power: The Enduring Life of Trayvon Martin" by Sybrina Fulton and Tracy Martin

He is the boy whose murder shocked the world. They are the parents whose grief and loss launched a movement.  In February of 2012, on an average evening in a small town in central Florida, seventeen-year-old Trayvon Martin was shot to death while walking home from the store with a bag of candy and a can of juice in his pockets. The head of the neighbourhood watch got out of the car against the advice of the authorities he had contacted regarding a suspicious person and followed the young man. This encounter ended with the man drawing his gun and taking Trayvon’s life. In the days that followed, Trayvon’s parents tried to get answers from the police but were ignored. They couldn’t understand how the man that murdered their son was allowed to walk free. Their grief overtook them but they knew they had to fight for their son and as time went on the world joined them in calling for justice for Trayvon and all victims of racism and gun violence. Rest In Power: The Enduring Li
Post a Comment
Read more

January 13, 2017
If you haven’t heard, celebrated Canadian author Joseph Boyden has come under the microscope over his Indigenous heritage. This isn’t the first time it has happened. Boyden, author of the novels Through Black Spruce , Three Day Road , The Orenda , and most recently the novella Wenjack , has for years been positioned as a spokesperson for Indigenous people in Canada. In the past, some have posed questions surrounding Boyden’s heritage and pointed out inconsistencies in his own personal stories. But it seems those questions were largely left to be minor discussions in the public realm. Until a couple of weeks ago when Jorge Barrera, journalist with the Aboriginal Peoples Television Network (APTN) and blogger Robert Jago raised the question again, this time having done research into Boyden’s genealogy based on his own words and coming up with no evidence to back up what he has claimed. For a little while, Boyden remained quiet on the subject other than issuing a statement reaffirming
1 comment
Read more
More posts