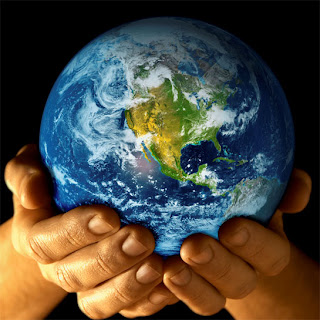 In 1970, the first Earth Day was the largest, organized citizen demonstration in U.S. history. 40 years later the importance of getting out the message is just as strong, if not stronger. As Christopher Hume wrote today in the Toronto Star, "To say that the planet must be saved is to state the obvious. But ultimately its fate isn't in our hands, it's more the other way around; our fate is in its hands. If it isn't healthy, neither are we."
In honour of Earth Day, here are some of my favourite green reads.
Going Green
David Suzuki's Green Guide - David Suzuki (2008)
Ecoholic - Adria Vasil (2007)
Go Green, Live Rich - David Bach (2008)
The Story of Stuff - Annie Leonard (2010)
Less Is More - Cecile Andrews and Wanda Urbanska (2009)
Slow Death by Rubber Duck - Rick Smith (2009)
Healthy Eating
Food Rules - Michael Pollan (2009)
The Kind Diet - Alicia Silverstone (2009)
Real Food - Nina Planck (2007)
Food, Inc. - Karl Weber (2009)
What to Eat - Marion Nestle (2007)
Green Dvd's
The Corporation (2007)
Food, Inc. (2010)
Who Killed the Electric Car (2006)
Darwin's Nightmare (2007)
The World According to Monsanto (2008)
Books I'm Looking Forward to Reading
Locavore: From Farmer's Fields to Rooftop Gardens, How Canadians are Changing the Way We Eat - Sarah Elton (2010)
Waste: Uncovering the Global Food Scandal, The True Cost of What the Global Food Industry Throws Away - Tristram Stuart (2009)
Sea Sick: The Global Ocean In Crisis - Alanna Mitchell (2009)
On a Dollar a Day: One Couples Unexpected Adventures in Eating in America - Christopher Greenslate (2010)