"What We All Long For" by Dionne Brand 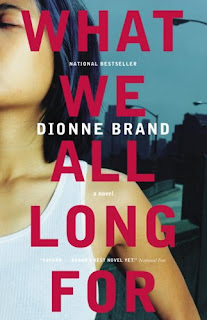 A family is fleeing their home in 1970's Vietnam. As the three children and two parents board a boat that will take them to a refugee camp in Thailand, the six year old boy follows the wrong pair of legs onto another boat. Years later, the family has made a new life in Toronto but the memory of their son Quy haunts them every day.
In the summer of 2002, Quy's sister Tuyen is an aspiring artist trying to make it on her own in the city. She spends her days with her friends Carla, Jackie, and Oku, each trying to find their own way and living day to day. They try to hide their lives from their families, and their families from their lives but as they quickly learn that is not easy.
Tuyen's brother Binh spends his time trying to track down Quy, who is now a dangerous criminal in the Thai underworld. Their worlds collide in Toronto with unexpected results.
What We All Long For is beautifully written. The characters are well developed and the City of Toronto is a stunning backdrop for the character's stories. It feels as though Toronto is another character in the book.
Unfortunately the actual story of the book was much different than what I was expecting from the book jacket description. The story of Quy played out more as a backstory to that of the four friends. I was expecting much more to his story. The final chapter of the story brings an unexpected, emotional ending, though it did leave me wanting to know more.
Overall, it is a well written book with real and emotional characters. While it was not what I was expecting, it is a good read especially for anyone who knows Toronto and appreciates the beauty and variety brought forth by the city.
Canadian Fiction