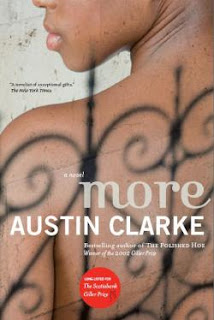 Idora Morrison, an immigrant from Barbados, has lived in Toronto for 25 years. After her deadbeat husband left for America, she struggled to make ends meet for herself and her son BJ. But now, Idora has discovered that BJ has disappeared into a life of gangs and crime.

For four days and nights, Idora remains hidden away in her rented basement apartment, trying to figure out how all of her best intentions have brought her to this tragic place. She recounts her most memorable moments, good and bad, as a black woman living in Canada. At the end of her self-imposed exile, she emerges with a newfound courage and perspective of her circumstances.

More is a wonderfully written book that does not hold back on its criticism of the state of race and poverty in Canada. Austin Clarke challenges readers to see Toronto from a different perspective, what is often an invisible perspective to so many. Idora’s story is that of so many immigrant women to Toronto, who are striving to make their lives better for their children in a place where every opportunity should be given to them but isn’t.

Clarke portrays the city of Toronto beautifully. It is a character unto itself with its emotions, beauty and contradictions. All of the characters in the book are real and easy to form attachments to.

As Idora recounts her life, the story jumps around a lot. It does not go in linear form, rather it takes you all over Idora’s life depending upon what reminds her of something or how something relates to her life. At times it can take a few moments to figure out where you are, but it really does not take anything away from the book.

More is an incredible book that challenges the way we see others, our city and ourselves. It lends a voice to those who so often feel voiceless in their struggle to survive. And it proves that everyone in this world has a life story that needs to be heard.