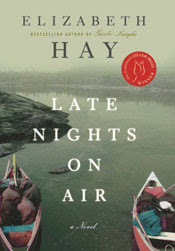 In the summer of 1975, an eccentric group of characters make up a small radio station in Yellowknife, Northwest Territories. Harry Boyd, the station manager, is back in the North after failing at television in Toronto. Dido Paris, the news reader, is an attraction and mystery to all. Eleanor Dew, the station secretary, is rediscovering herself as a Christian. Ralph Cody, the book critic, is a nature photographer in his spare time. Eddy Fitzgerald, the radio technician, has radical leanings and may possibly be involved in some suspicious activity around town. Gwen Symon, the amateur announcer, is the newcomer to the station having driven by herself from Toronto to Yellowknife in search of a job.

Their lives play out against the backdrop of daily life in the Northwest Territories, as well as the Mackenzie Pipeline Project Inquiry. Relationships form, and complications arise. Love, loss, jealousy and trust all play out in this book.

Harry, Eleanor, Gwen and Ralph decide to travel together through the inhospitable Barrens, retracing the route of 19th century explorer John Hornby, who perished along with two others on his journey. Along the way they battle the wilderness, their shortcomings and tragedy, forming a lasting bond and discovering where their lives are heading.

Late Nights on Air is an incredible story about life in the North, it's harshness and isolation, it's sense of community and beauty. The part of the book where the four characters travel the Barren is rich in descriptiveness and imagery. Unfortunately, it takes a long time to get to this part of the book. The characters are richly developed and Hay does an excellent job of weaving in the politics of the Pipeline Inquiry, but it does get a little long which unfortunately takes some interest away from the story.

The book will peak your interest in the Canadian North and the beauty that it provides. Late Nights on Air was the winner of the Giller Prize in 2007. While it does not seem like a standout prize winner, it is still an interesting novel and great Canadian read.