Showing posts from August, 2016
Show all

"Three Years with the Rat" by Jay Hosking

A young man has moved back to Toronto, the city he grew up in, after years of drifting between school and work that was getting him nowhere. His older sister, Grace, is the one who has brought him back home and she and her friends take him under their wing, helping him find friendship, romance, and a job. Grace and her boyfriend John are promising researchers in psychophysics but it soon becomes apparent to the man that all is not well with his sister and her research. When the two of them disappear, first Grace then months later John, the man makes an incredible discovery while cleaning out their apartment. In the second bedroom that they always kept locked, Grace and John have left behind a box big enough to crawl inside of, a lab, rat, and a note that says “this is the only way back for us.” After months of witnessing Grace’s rage and John’s mental health decline, the man knows that these are not ordinary circumstances. And he knows that he was brought back to Toronto for
1 comment
Read more

"The Girls in the Garden" by Lisa Jewell

When Clare moves into a new home with her eleven-year-old daughter Pip and thirteen-year-old daughter Grace, she is pleased to find that the private garden square they back on to is shared by other families with children around the same age. In the bustling city of London, the garden is a place where children can roam free and are encouraged to make other people’s homes their own. Especially the home of Adele, Leo, and their three daughters. Clare and her daughters are starting over and the girls are thrilled to quickly fall in with the crowd of kids. Clare isn’t sure she will fit in with the adults, but is happy her daughters have made friends. It may be a motley group of kids but everyone seems nice enough. Until Grace becomes the girlfriend of one of the boys in the group and runs afoul of a couple of the other girls. One summer night, after the annual party in the garden, Pip discovers Grace lying unconscious and bloody in a tucked away area of the park. No one knows wha
Post a Comment
Read more

August 07, 2016
Reviewed This Week The Hopefuls - Jennifer Close The Girls  - Emma Cline Falling - Jane Green Read This Week Wellth - Jason Wachob Where’d You Go Bernadette - Maria Semple Moon Girl and Devil Dinosaur Vol. 1 - Brandon Montclair The Underground Railroad - Colson Whitehead (started) Online bits and bobs CBC Books released their Fall Preview . So many good books, my TBR exploded. Apparently, people who read books live longer . Here's to an extra 10 years! I've spent some time with my Pinterest page. By that I mean, I stopped ignoring it. I've joined Reco . Because I apparently I need another bookish app to keep me busy. But seriously, this is a good one. Stories from the Bookshop Unless you’ve been living under a rock, you will know that last Sunday was the release of Harry Potter and the Cursed Child . I didn’t work that day but I did work the next day (and the days after that) and it’s safe to say that Harry was the m
Post a Comment
Read more

Emma Montague is looking for a new life, one far from her days as a banker in New York City where she moved to escape the confines of her upper-class British family.  When she finds a cottage in the beautiful town of Westport, Connecticut that is in need of a lot of TLC, she knows she has found the perfect place. She can leave the fast-paced and stressful world of finance behind and pursue her passion for interior design. Knowing only one other person in town, Emma throws herself into fixing up the cottage, much to the dismay of her landlord and next door neighbour Dominic. But she quickly wins Dominic over and when he lends her a hand, she realizes that the two of them make a great team. And not just at fixing up houses. Dominic isn’t the type of man that Emma usually goes for but that doesn’t stop her from falling for him. As they spend more and more time together, she realizes that in him and his six-year-old son she has found the family she has always wanted. But the cir
Post a Comment
Read more

"The Girls" by Emma Cline

One hot summer day, fourteen-year-old Evie Boyd comes across a group of girls at the park who are unlike no others she has even seen. Dressed carelessly, dirty, searching through dumpsters for food, stealing from stores, Evie is immediately drawn to the girls. A lonely girl herself, she is envious of their freedom and the way they move through life with wondrous abandon. This is a group of girls she wants to be friends with. Evie is quickly drawn into their circle through the care and attention of one of the older girls named Suzanne. Evie is mesmerized by Suzanne who gives her access to a world she never knew existed. She goes with them to the ranch hidden away in the hills of California that they live in and meets the groups charismatic leader Russell.  Evie truly believes that this is where she belongs, not back home with her parents who couldn’t care less and the friends who have turned against her. As she spends more and more time with this group, she desires to stay fo
Post a Comment
Read more 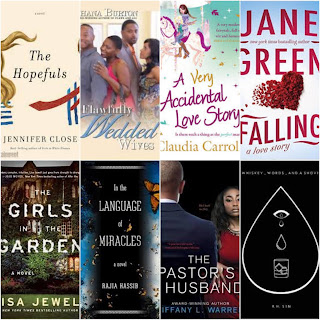 July was a great month for me reading-wise because it was my vacation month. We spent two weeks in America and that always results in a high number of books read for me because I love nothing more than reading by the pool. Of course, I didn’t finish ALL of the books I took with me on vacation but that’s because I always seem to take more with me than I could ever read in that time period. Here is what I read in July with my GoodReads ratings: Flawfully Wedded Wives - Shana Burton **** Falling - Jane Green **** The Pastor’s Husband - Tiffany L. Warren **** The Hopefuls - Jennifer Close **** Whisky, Words, and a Shovel - R.H. Sin **** In the Language of Miracles - Rajia Hassib **** A Very Accidental Love Story - Claudia Carroll *** The Girls in the Garden - Lisa Jewell *** Thoughts My favourite of the month was The Hopefuls . It is a fun and easy read that I found myself completely engrossed in. I think Falling is going to be the book I recommend to people who li
Post a Comment
Read more

"The Hopefuls" by Jennifer Close

When Beth Kelly moves from New York City to Washington D.C. after her husband Matt gets a job at the White House, she is less than thrilled. She loved everything about New York City and the people there were her people. In D.C., it seems to Beth that everyone is obsessed with politics and if you’re not one of them you’re on the outside looking in. In a place where people like to compare their security clearance levels, speak in acronyms, and can’t separate themselves from their Blackberries, Beth is all on her own. But when Beth and Matt meet White House staffer Jimmy and his wife Ashleigh, things begin to brighten for her a little bit. Right from the beginning Ashleigh and Beth get each other, they connect over being outsiders, and before long are doing everything together. Jimmy and Matt get along perfectly and push each other to succeed in the fast-paced world of politics. The foursome quickly become inseparable spending meals, birthdays, and holidays together. When Jimmy
Post a Comment
Read more
More posts