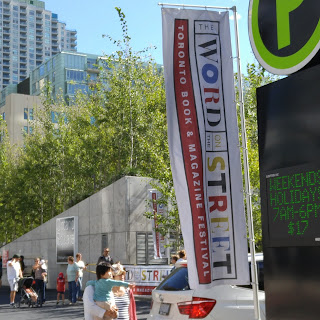 This past weekend was The Word on the Street festival, an annual book and magazine festival in Toronto (and other cities across Canada.)  Or as I call it, Christmas for book lovers.

This year the festival moved down to Harbourfront Centre, which was a beautiful location because there is nothing like browsing books while looking out at the lake.  It was a little disorienting for me, as in the past it was always held at Queen's Park and so all of the booths and tents were along one street and very easy to browse while walking up and down the street.  Here, you definitely needed a map to get around as the booths and tents were in clusters rather than along the road.

But other than that, it was the exact same event - great book deals and tons of great readings and discussions.

I did all of my browsing when I got there, picking up some French books for my kids and saying hello to people.   I met André Alexis and told him how much I enjoyed Fifteen Dogs and that I'm hoping it does really well this awards season.  I also won a kids book pack from the Toronto Public Library Worker!  My kids were so excited when I brought it home, you can see all of the books below that were in the bag.  They are all Canadian and quite a few are Toronto books so they were thrilled about that. 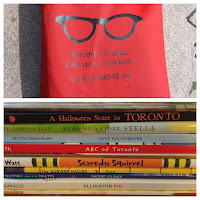 Once I did all of my browsing it was time to start attending the readings and discussions I was interested in.  First up was Treasured Islands: Life in the Caribbean at the Vibrant Voices of Ontario Tent with Robert Hough, author of The Man Who Saved Henry Morgan and Sabrina Ramnanan, author of Nothing Like Love.  This talk was really interesting to hear about the process of Canadian authors writing stories that take place elsewhere. 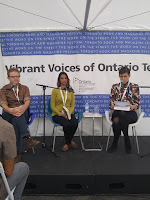 Next was the Diaspora Dialogues Feature: The Story Behind the Book - Four Writers on How They Got Published at the Toronto Book Awards Tent.  This featured Jael Richardson, author of The Stone Thrower; Jon Chan Simpson, author of Chinkstar; Sabrina Ramnanan, author of Nothing Like Love; and Cherie Dimaline, author of The Girl Who Grew a Galaxy.  Each author read from their books and then they discussed the challenges facing diversity in the publishing industry in Canada and their own experiences getting published and what comes after. 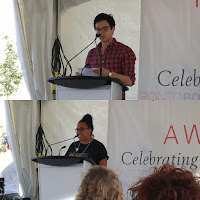 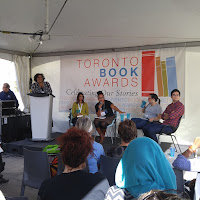 Afterwards I said hello to Jael, who is the director of The Fold, which is Canada's first literary festival dedicated to diverse stories and will be happening in May of 2016.  It's always nice to connect with a Twitter friend in real life!  We first met at Word on the Street a few years ago when I bought her book so it was nice to see her there again. 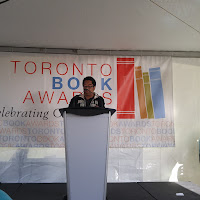 By this time it was getting late in the day so I decided that it was time to head home.  I was carrying around a lot of books and since I still had a bit of a journey on public transit, my day was done.  And once again, it was another fantastic year at Word on the Street.