Black-ish continues to be my favourite show on television.  I often feel as though I'm watching my life play out on screen (the episode where the Mother-in-Law comes to visit) or viewing what life is going to be like in 8 years time (the father dealing with his daughter having a boyfriend.)  My husband was really unsure of what this show would turn out to be but we both spend the entire half hour laughing our heads off.

And the new show Fresh Off the Boat has also captured our attention.  I began watching for the incredible 90's hip-hop soundtrack and Eddie's fantastic t-shirts and ended up enjoying everything.  Any child of immigrants will find so much humour in this show (the line this week, "crank up the a/c to low" is something I'm pretty sure I heard my dad say when I was a kid.)

I'm very glad that these two shows have turned out great because my two previous favourite shows, Big Bang Theory and Modern Family have been letting me down a lot lately.

This was Oscar month and usually I spend the months leading up to it watching the nominees.  But this year, after Selma was snubbed so ridiculously, I didn't feel like it.  I had already seen half of the Best Picture nominees because those were the movies I wanted to see but I just didn't feel like bothering to watch the movies I wasn't that interested in at that point.  I did watch the awards show and am glad that The Grand Budapest Hotel won so many awards (I loved that movie.)  And the acceptance speeches by Common and John Legend, as well as Graham Moore, were so beautiful and necessary for the world we live in.  Of course, it was much more fun to follow along with the show on Twitter.  Because you got moments like this: 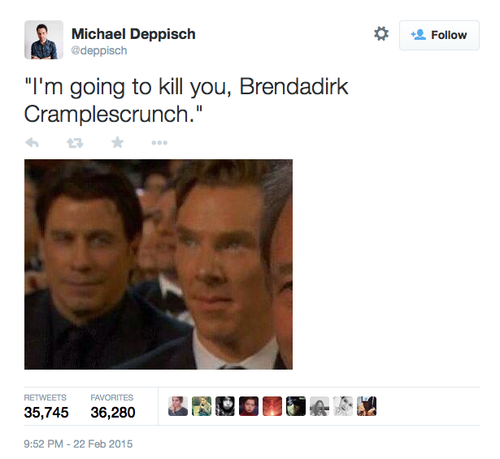 This month I watched two great documentaries.  The first is You Laugh But It's True which follows South African comedian Trevor Noah as he prepares for his first one-man show.  It also looks at his life as a mixed race person in Apartheid South Africa where mixed race relationships were illegal, and thus his being was illegal.  Trevor Noah is hilarious and this is a very moving film.

The second is The Drop Box which I was able to preview, it will be in theatres March 4th and 5th.  It is about a pastor in South Korea who installed a drop box in his church where people can place their babies rather than abandoning them to the streets.  Since he installed the box, he has saved the lives of over 600 babies.  I spent most of this film in tears, at the sadness that surrounds the babies and their parents and also the hope that Pastor Lee Jong-rak brings to this world.