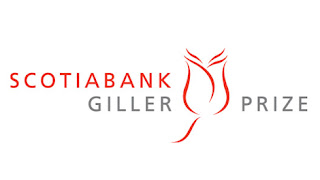 Tonight the winner of the Scotiabank Giller Prize will be announced.  It's Canada's biggest literary prize and it kicks off the big three of the literary season here.  This year I have been able to read all five of the books on the shortlist and thus I can make a true prediction of who I think will win!

That being said, I have no clue!  There is no one runaway book for me that I can point to and say "that's the book that will win hands down."  I think a lot of readers are also probably thinking the same thing.  It's too hard for me to say which one will be picked by the jurors.  That being said, if I were picking the winner, I would pick

The Imposter Bride by Nancy Richler

I haven't posted a review for this book as I just finished reading it today (just in time!)  But here is the description from the book jacket:

A young, enigmatic woman - Lily Azerov - arrives in post-war Montreal expecting to meet her betrothed, Sol Kramer.  When Sol sees Lily at the train station, however, he turns her down.  His brother, Nathan, sees Lily and instantly decides to marry her instead.  But Lily is not the person she claims to be, and her attempt to live a quiet existence as Nathan Kramer's wife shatters when she disappears, leaving her baby daughter with only a diary, an uncut diamond, and a need to discover the truth.  Who is Lily, and what happened to the young woman whose identity she stole?  Why has she left and where did she go?  It is up to the daughter Lily abandoned to find the answers to these questions as she searches for the mother she may never find or truly know.

Here are my reviews of the other shortlisted books:
419 by Will Ferguson
Ru by Kim Thuy
Whirl Away by Russel Wangersky
Inside by Alix Ohlin

Do you have a Giller prediction?