"Summer and the City" by Candace Bushnell 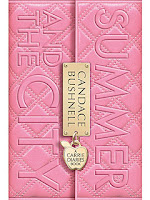 Through six seasons and two movies we laughed, cried, celebrated and hurt with the ladies of Sex and the City. They were more than characters on the television and movie screen, they were friends, alter-egos, role models. When we met them, they were successful women with homes, careers and love lives.

In The Carrie Diaries, we were introduced to teenage Carrie Bradshaw. We discovered where she came from and how she ended up in New York City. And now, in Summer and the City, we see how she met Samantha and Miranda and how she came to settle in NYC.

Summer and the City by Candace Bushnell is a young adult novel that fans of Sex and the City will enjoy no matter what their age. While the intent of the novel is to discover who the women we love so much are and what made them the women we know, the book itself is a great stand-alone novel, a story of young women taking New York City by storm in the 1980's.

Carrie has arrived in NYC to take a summer writing class at The New School. After a rough start she is taken in by Samantha Jones, who is working her way up in the advertising field and planning her wedding to one of the city's most eligible bachelors. As Carrie falls in love with an older man and finds herself immersed in the city's fast-paced society culture she learns lessons of love, heartbreak and discovering your voice. When she meets Miranda Hobbes outside of Saks, where the hardcore feminist is protesting pornography, she discovers the importance of female friendship and the power it has in her life.

Meeting the women in their late teens and early twenties is such a trip. Whatever idea you had of them, you can forget. They are not the same women we met in the show, but you see glimpses of who they are to become. And when we get a very brief glimpse of young Charlotte you can't help but smile with nostalgia for a brilliant television show that so greatly influenced the lives of many women.

Don't let the young adult designation steer you away from this book if you are a fan of the show, it is written in a voice that acknowledges readers of all ages. And if you are wondering if your teenage daughter should read the book, don't let the sexual nature of the show worry you, it's not in the book.

Summer and the City is another great book by Candace Bushnell and will be loved by all fans of the show. Now if you'll excuse me, I need to go re-watch the entire series.