January 16, 2015
For my first Author Interview, I'm pleased to introduce you to Peggy Blair.  Peggy is a Canadian author of the Inspector Ramirez series, which includes The Beggar's Opera and The Poisoned Pawn. The third instalment,  Hungry Ghosts, will be released in June.

I was very fortunate to meet Peggy a few years ago at the Word on the Street Festival and she is an absolutely lovely person who is always well connected to her readers.  Be sure to follow her on Twitter @peggy_blair.

Peggy has a great story about how she got her first book deal and I'm so happy she is sharing it here with my readers and answering a few other questions.  Enjoy!

What was the process of getting a book deal like for you?

Well, a lot of what happened around The Beggar’s Opera involved sheer luck. Not to mention timing. But also persistence. Honestly,  after 156 rejections by agents, I was ready to trunk the entire manuscript. My friends thought I’d lost my mind and that I should give up and get back to a real job.

I finally decided to put the manuscript into a few international competitions. If it didn’t get any traction, I was done. And I started taking my real estate exams. I’d done my best, I thought. I’ve tried.

I entered The Beggar’s Opera in the St. Martin’s/Minotaur contest in the U.S.  I also entered it in the Unhanged Arthur Ellis competition in Canada, run by Crime Writers of Canada.  I thought I might have a shot at the Ellis, since I had sat as judge on the CWC non-fiction panel. The third, and least likely, was also the most prestigious: the Debut Dagger Award of the UK Crime Writers Association. Canadians had done well in the past, but a Canadian had won the Debut Dagger the year before, another, three years before that. I thought it was unlikely that I’d get too far.

St. Martin’s was a wash. I didn’t even get a ‘thank you for your entry.’ The Unhanged Arthur Ellis short list was long, but I wasn’t on it. And then, the deadline for hearing about the Debut Dagger passed with no news. So I finished my real estate exams and started looking for a brokerage to work with. A few weeks later,  when I got a letter postmarked from England, I actually wondered who the heck I knew there.  “I am delighted to inform you that The Beggar’s Opera has been shortlisted for the Debut Dagger Award,”  it began. And right then, I knew everything had changed.

Once the shortlist was announced, several agents from top U.K. literary agencies contacted me, asking for my manuscript. Was I coming to Harrogate, one asked, where the award would be announced? I hadn’t thought about it.

Since I was still unemployed, my friends fundraised the money for me to fly to Yorkshire. I hoped like hell I would win: after all, that would almost guarantee publication. But I didn’t and I admit; I was pretty disappointed. One of the agents I was supposed to meet didn’t show up. The other managed to avoid my eyes like a waiter in a snooty French restaurant.

I’d spent a lot of other people’s money and was no further ahead. Okay, I thought. I guess it’s real estate. On my last night in England, I went to the bar for a last glass of wine before I returned to the hotel to pack for my red-eye flight back to Canada. The bar was empty. There were sessions going on that I couldn’t afford, and that’s where almost everyone else was.

Which was why I was the only person at the bar when the Scottish author, Ian Rankin, walked by. Now normally,  if I see a celebrity, I leave them alone. But I’d promised the Crime Writers of Canada that I’d take photographs.

“Mr. Rankin,” I called out. “Can I take your picture for the Crime Writers of Canada’s website?” 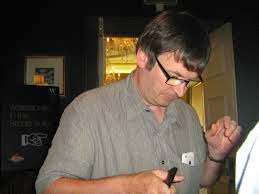 He asked me where I was from. It turned out he had just returned from Ottawa’s Bluefest the week before. He’d been there with his son. If we hadn’t had that five minute chat about the crazy 40 degree heat he’d experienced in my city, I doubt he would have asked me why I was in Harrogate, or if I had an agent or a publisher.  I snorted and told him the manuscript had been rejected 156 times.  “Being shortlisted for the Debut Dagger is quite an accomplishment,” he said. “Have you contacted my Canadian publisher?” he asked and named her.

“Well, no,” I said. “But I doubt she’d accept an unsolicited manuscript. They usually only deal with agents.”

“I’m pretty sure she will if you use my name,” he replied.

I almost fell over. He hadn’t read a word of my work.  I realized later he didn’t even know my name; I’d neglected to introduce myself. “Really?” I said. “You’d let me do that. Are you sure?”

When I got back to Canada, I contacted Kim MacArthur, his Canadian publisher. “Well, of course, I’ll take a look at it if Ian is recommending it. Do you have an agent?” she asked. “Have you contacted Ian’s agent, Peter Robinson? ”

I found Peter’s email address online and emailed him. I included the entire thread, so he’d know that I’d met Ian Rankin only briefly, and in a bar. It was a very apologetic “I’m sure you’re busy and I don’t want to take up your time” kind of email; very Canadian.

“I’d love to read your manuscript; I’d be a fool not to if Kim and Ian are recommending it,” he replied only minutes later. “But I can’t get to it for several weeks. We’re busy, getting ready for the Frankfurt Book Fair. Is that okay?”

Weeks? I’d waited to hear from some agents for months. That was early one Friday morning. On Monday morning, I came downstairs to find an email from Peter: ‘I read the novel over the weekend and quite literally couldn’t put it down. I love it and on the strength of this would love to represent the book and you.’

Three weeks later, The Beggar’s Opera was on the hot list at the Frankfurt Book Fair. Germany made a pre-emptive offer, followed by Holland, then Norway. And then Penguin Canada purchased the world English language rights.

‘I worked so hard that I got lucky,’ is the phrase that comes to mind. The Beggar’s Opera has since been published in the UK, the US, and the Czech Republic, and will be published in Israel soon. It’s been reviewed favourably by the New York Times.

Which author have you recently discovered that you think we should all read?

As far as Canadian authors go, C.B. (Chris) Forrest is one of the most beautiful, poetic writers imaginable. I’ve actually found myself taking notes when I’m reading his books, jotting down a phrase or two that I want to revisit later to think about. There’s no other author whose writing has moved me to do that. I think he’s brilliant.

What tv show would you love to do a cameo in?

Oh boy, that’s a tough one but  I’m a big fan of Walking Dead. I think I could play a pretty convincing zombie.

Which actors/actresses would you cast in the movie of your book?

My movie has always starred José Zuniga as Inspector Ramirez. Latino. Handsome but not pretty, funny, smart.  I can’t take my eyes off him whenever I see him on television. And of course, Peter Dinklage has to be Apiro. Who else could play that complex role? For my Maria, I would  definitely pick supermodel Andrej Pejic: he recently came out as transgendered.

Thank you Peggy for stopping by! I love reading your book deal story.  You are proof to just keep going and never get discouraged!