"Sirocco: Fabulous Flavours from the Middle East" by Sabrina Ghayour 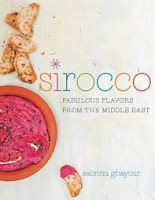 When the East and the West are combined in the oven, delicious foods are created. In Sirocco: Fabulous Flavours from the Middle East, food writer and self-taught cook Sabrina Ghayour combines the foods she knew growing up in England with the Eastern flavours of her Persian heritage. These recipes aren’t authentically Middle Eastern but they are inspired by the beautiful spices and dishes that come out of the region.

There is an incredible Turkish restaurant not too far from where I live and if I could eat there every day I would. But I can’t, so when I saw this cookbook I knew that it would be the perfect book for a novice chef like me to recreate the foods I love so much from that restaurant. This is a great book for the Western cook that wants to introduce Middle Eastern cuisine to their repertoire.

Ghayour begins the book by sharing the must-have Eastern spices that are lesser known in the West such as Aleppo pepper and Za’atar. For each recipe she discusses the origins, flavours, and importance of the dish so it’s not just about cooking a dish but understanding the rich cuisine and heritage of the Middle East.

I also really like that Ghayour is a self-taught cook, I think it is evident throughout the book and she understands that the people who are using her cookbook are as well. The recipes are easy to follow and each recipe has a wonderful explanation of its place in the culture and what she loves about the flavours, as well as lots of personal stories. And the photos are absolutely spectacular, this is a very beautiful cookbook.

Whenever I get a cookbook, I sit down first and flip through the whole thing, using sticky notes to mark pages.  I have one colour for recipes that interest me and another colour for recipes I must try right away. Let’s just say that this book is filled with sticky notes of both colours, more than any other cookbook I own.  There is something for everyone in here, for vegetarians and meat-eaters, for rookie cooks and master chefs. This is a great book for anyone who wants to dive into the delicious world of Middle Eastern cuisine.

I received a copy of this book courtesy of Penguin Random House of Canada. The opinions expressed above are my own.
Cookbook Middle East