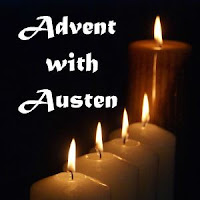 Why Advent with Austen? Because it's been 200 years since Sense and Sensibility was published and because December 16 was Jane Austen's birthday.
Why am I participating? Umm....because I've never read anything by Jane Austen *runs and takes cover* Seriously. I know what you're all thinking, how can we ever trust anything she says about books again? Well, things are about to change.
My plans:
So I don't know how much reading I'm going to get done but the plan is start with Pride and Prejudice and Persuasion, hopefully move onto Emma and then if I'm lucky get in a little Northanger Abbey. If I get really adventurous I'll pick up Sense and Sensibility.
I won't just be reading though. Thanks to Netflix, I'll be doing a little watching as well. I'm going to watch the film versions of Pride and Prejudice, Persuasion and Sense and Sensibility. I'll also watch The Jane Austen Book Club and Lost in Austen.
Happy Advent with Austen!