August 07, 2010
In My Mailbox is a weekly meme hosted by The Story Siren, designed to showcase which books we brought home with us in the past week. This week I brought home three delicious chick lit
books from the library. 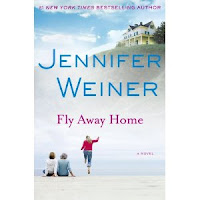 Fly Away Home by Jennifer Weiner (2010)
When Sylvie Serfer met Richard Woodruff in law school, she had wild curls, wide hips, and lots of opinions. Decades later, Sylvie has remade herself as the ideal politician's wife-her hair dyed and straightened, her hippie-chick wardrobe replaced by tailored knit suits. At fifty-seven, she ruefully acknowledges that her job is staying twenty pounds thinner than she was in her twenties and tending to her husband, the senator.Lizzie, the Woodruffs' younger daughter, is at twenty-four a recovering addict, whose mantra HALT (Hungry? Angry? Lonely? Tired?) helps her keep her life under control. Still, trouble always seems to find her. Her older sister, Diana, an emergency room physician, has everything Lizzie failed to achieve-a husband, a young son, the perfect home-and yet she's trapped in a loveless marriage. With temptation waiting in one of the ER's exam rooms, she finds herself craving more. After Richard's extramarital affair makes headlines, the three women are drawn into the painful glare of the national spotlight. Once the press conference is over, each is forced to reconsider her life, who she is and who she is meant to be. 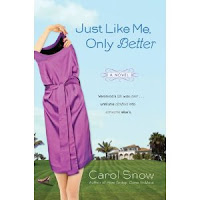 Just Like Me, Only Better by Carol Snow (2010)
Ever since Veronica's husband found the love of his life-not her-she's been a walking zombie with runny mascara. It doesn't help that she keeps getting mistaken for Haley Rush-the Hollywood starlet whose dazzling life is plastered on every magazine. When Haley's manager offers Veronica a job as a celebrity double, it only takes a moment before she says yes. Veronica gets to drive Haley's car, wear her phenomenal clothes-and have fun with her hot celebrity boyfriend, Brady Ellis. Too bad the job's only part-time, and at the end of the day she has to return to her life as a cash-strapped substitute teacher and cub scout mom. But when real sparks fly with Brady, is it a fantasy come true or a disaster in disguise? 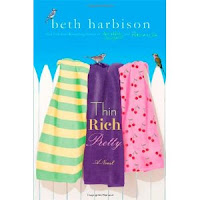 Thin, Rich, Pretty by Beth Harbison (2010)
Twenty years ago, when they were teenagers, Holly and Nicola were the outsiders at summer camp. Holly was the plump one, a dreamer who longed to be an artist. Nicola was the shy, plain one who wanted nothing more than to be beautiful. Their cabin nemesis was Lexi. Rich, spoiled, evil Lexi. One night, Holly and Nicola team up to pull one, daring act of vengeance. But they never dream that this one act will have repercussions that will reach into the future, even twenty years later. And they never realize the secret pain that Lexi holds very close, and how their need for revenge costs Lexi a great deal. Today, Holly is a successful gallery owner, who has put her own artistic dreams on hold. She struggles with her weight and for approval from her constantly-criticizing boyfriend. Nicola, is an almost-famous actress who believes that one little plastic surgery fix is just what she needs to put her over the edge into fame. And Lexi.Lexi is down on her luck and totally broke. Holly will do anything to be thin. Lexi will do anything to be rich. And Nicola will do anything to be pretty.