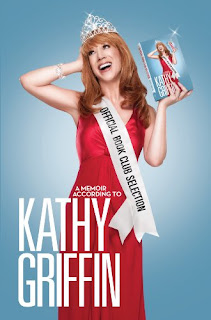 Life on the D-List is anything but boring. In Official Book Club Selection: A Memoir According to Kathy Griffin the comedian holds nothing back and gives readers an intimate look at life in Hollywood from the perspective of a D-lister.

I must admit, I was a little worried going into the book that I would be offended by the content or language. And of course, her language does get a little colourful at times. But using her trademark wit, Kathy gives readers a hilarious look at her childhood, her attempt to break into the comedy circuit, her plastic surgeries and what happened when fame finally came. No one is spared from Kathy, and some juicy Hollywood gossip is spilled (even if some of it is speculation.) Reading this book will give you an understanding of who and what has shaped Kathy and her brand of comedy.

Think of this book as your guilty pleasure reading. You'll laugh, you'll shake your head, and you may even be offended at times, but you will also find Kathy endearing and hilarious.
Biography Celebrity Humour