They put on a breakfast for us and not just any breakfast, they made us pancakes. Mine were in the shape of Mickey Mouse and had chocolate chips for eyes. Shout out to the cooks! Then they introduced the many authors they had attending the breakfast and we were all able to mill around after that and get to know them.

The first author I spoke with was Vikki VanSickle. Vikki has written the middle grade novels Words That Start With B, Love is a Four-Letter Word, Days That End in Y, and Summer Days, Starry Nights. Her newest books is a children’s picture book titled If I Had A Gryphon. 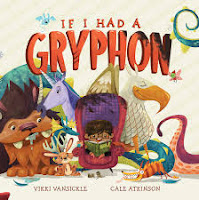 When a kitten sneezes it's adorable. When a dragon sneezes? It's a fire hazard!

Sam is already bored of her new pet, a rather sedate hamster. Inspired by her book of mythological creatures, Sam longs for a more exciting pet. But she soon realizes that taking care of these magical beasts might not be as wonderful as she thought. Unicorns are shy, gryphons scare the dogs at the dogpark, and having a fire extinguisher handy at all times makes dragons seem like an awful lot of work. In the end, Sam realizes that her hamster is a pretty sweet and safe pet ... or is he?
If I Had a Gryphon is a raucous rhyming read-aloud about fantastical beasts in everyday situations--and the increasingly beleaguered heroine who has to deal with them. The perfect primer on mythological and fantastic beasts for young kids not quite ready for Harry Potter!

Vikki spoke to us about what influences her books (her childhood, books she loved, movies she loved), what book she has recently read that she loves (Ruta Sepetys’ Salt to the Sea) and what she is working on now (a middle grade novel inspired by the X-Files…I hope I can say that here!)

The other author I spoke with was Shane Peacock. Shane is the author of the Boy Sherlock Holmes series which as nominated for a Governor General’s Literary Award. He has also contributed to the Seven series. His most recent book is The Dark Missions of Edgar Brim, the first in a new gothic trilogy.

Edgar Brim is a sensitive orphan who, exposed to horror stories from his father as a young child, is afraid of almost everything and suffers from nightly terrors. His stern new guardian, Mr. Thorne, sends the boy to a gloomy school in Scotland where his dark demons only seem to worsen and he is bullied and ridiculed for his fears. But years later, when sixteen-year-old Edgar finds a journal belonging to his novelist father, he becomes determined to confront his nightmares and the bullies who taunt him. After the horrific death of a schoolmate, Edgar becomes involved with an eccentric society at the urging of a mysterious professor who believes that monsters from famous works of literature are real and whose mandate is to find and destroy these creatures. With the aid of a rag-tag crew of friends, the fear-addled teen sets about on his dark mission, one that begins in the cemetery on the bleak Scottish moors and ends in a spine-chilling climax on the stage of the Royal Lyceum Theatre in London with Henry Irving, the infamous and magnetic actor, and his manager, Bram Stoker, the author of the most frightening and sensational novel of the day, Dracula. Can Edgar Brim truly face his terror and conquer his fears?

We talked about a lot of different topics with Shane, such as the difficulties of being a writer in the Canadian publishing industry, getting your book into stores, his upcoming picture book The Artist and Me (about Vincent van Gogh and how he was bullied), and the American presidential race.

Overall, it was an amazing event and there are a ton of great kids books coming out this Spring from Random House of Canada. Just check out the upcoming books I picked up! 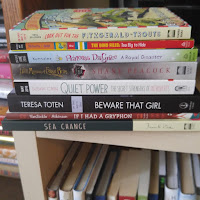